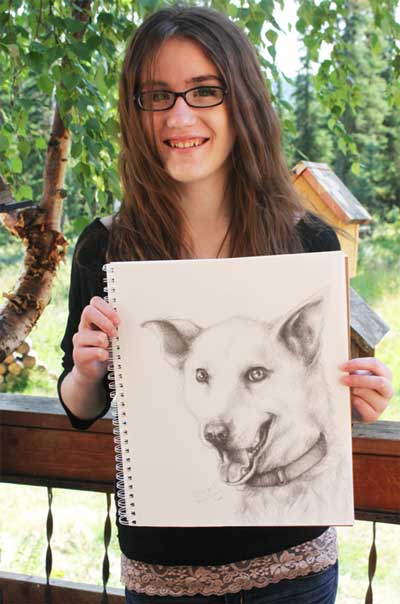 Shawna Zusi-Cobb, a 2012 senior at West Valley H.S., was born and raised in Fairbanks, Alaska. Passionate about drawing portraits since she was very young, Shawna rarely goes anywhere without a pencil and sketchbook. She also enjoys painting, photography, digital arts and graphic design, and has volunteered these skills to promote a variety of groups and productions in Fairbanks, most recently donating her poster art and design for the North Star Ballet’s 25th anniversary production of The Nutcracker. Shawna will attend college next year in Oregon or Washington and major in Digital Arts/Graphic Design while continuing to pursue her interest in fine art.

My friendship with Athabaskan dog mushing legend George Attla happened by chance. I met him through my mother’s good friend, and he asked to see the drawings in the sketchbook I always carry. Impressed by my pencil portraits, he asked if I could draw his grandson. He was so happy with the drawing that he asked if I would draw his favorite dog of his 50-year mushing career, Lingo (born in 1979). The drawing of Lingo was my first attempt at an animal portrait. As a surprise for George’s 78th birthday, we framed and shipped the Lingo drawing to Huslia on a pallet of dog food, and are told it pulled him out of a health slump. He said it captured the dog’s spirit, and it now hangs in his cabin in the Alaskan Koyukuk River village. The drawing of Lingo was just published in the January issue of Mushing Magazine, after the editor returned from Huslia, where he saw the drawing in George’s cabin.