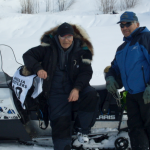 2011.04- Turco, Kathy of George with Steven Bergman after win of KRC in memory of Bergman Sam

After seven decades of public relation work to promote the sport of sled dog racing, George Attla says the job is never done. Having grown up in the Koyukuk River area of Interior Alaska, George deeply understands the pride of Athabascan people and their villages, which have a lot to do with their dogs. George says, “The people here help each other out for the most part. It’s not about me anymore, I want to see the whole region do well; I would like to see better dog teams up and down the river, and I think I can help them achieve that.”

Today, George loans his race dogs to junior mushers in the village in an effort to see more youth involvement in the sport. He freely shares his extensive knowledge about sled dogs to any one who asks. His current collection of dogs includes the bloodlines of top-level sprint racers, but he also makes an effort to maintain the village dog strain in his dogs. He keeps up with modern equipment associated with racing dogs and says he is always learning more about how to be a better dog trainer.

In his desire to see other village racers build good teams, he has given pups and adult dogs outright to other mushers in the area who are in need of dogs. Despite the dwindling number of village teams and though he has retired from competing in the big races, George is extraordinary in his desire, passion, and selfless dedication to see the sport of sprint mushing continue into the future. Read more about his work of today.