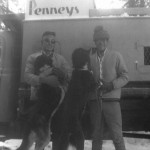 George says that one of the many special things that sled dogs brought to his life is good people. These good people started with his father, who used sled dogs to provide for his family and others; the great dogmen of his youth and adulthood whom he fondly refers to as professors; the young mushers who sought his knowledge about dogs and inspired him to keep racing; the sled dog racing competitors who challenged him to be the best he could be; and the fans, whose enthusiasm allowed the sport to grow in popularity. George won’t hesitate to tell you that he feels very fortunate to have known so many good people involved in working with sled dogs, and to have had  a family that offered unwavering support over his entire life.

“I have driven dogs a time or two, enough to know what a driver means when he says the dogs’ exuberance can get up inside you, that you take on their abandonment and their great generosity of spirit, that you have to discipline that in them, and in yourself. I stand on the sidelines and watch in simple awe the unhesitating charge through a long turn of a team that wants to run, being driven by someone who knows that desire in them and cares for it, who communicates empathy and respect. What dogs give in these circumstances is enough to humble a human being.” ~Barry Lopez